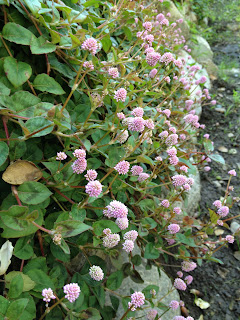 This is a groundcover used in frost free areas. I've seen it with frost burn in SoCal but rarely. It grows in sun or part shade to only 6" high but as much as 6' wide. I've always known it as Pink Clover. But I've read it to be called Pink Knotweed, Pinkhead Smartweed and I'm sure there are more names. The botanical name is Polygonum capitatum. This photo was taken at one of my jobs in Pasadena. It is spilling over a rock wall. I've always thought the cute pink fowers look like the puff from Dr Seuss' "Horton Hears A Who" on which the whole land of Whos live. The plant can be a weed to those who don't want it. Groundcovers travel and therefor often grow to compete or swallow up other plants. Keep it contained and enjoy the cute little flowers of Pink Clover.
Posted by Aprille at 10:54 AM No comments:

I stopped to get gasoline this week AND while my little truck was sucking up all my money I noticed a beautiful plant growing in the median strip on the street in San Dimas.  It was so gorgeous, I had to take photos.  The common name is Poinciana or Red Bird Of Paradise.  The botanical name is Caesalpinia pulcherrima.  I was taught to say it; SAY-sal-PIN-e-ah.    This one was spectacular, about 8 feet wide and 6 feet tall.  It'll grow to about 10 and is native to the West Indies.  It blooms in Summer to Fall.  Here it is semi-evergreen, might lose it's leaves in winter depending on how cold we get.    None of my clients grow it.  It is a little uncommon here but stop-your-car-beautiful when you see it :-) 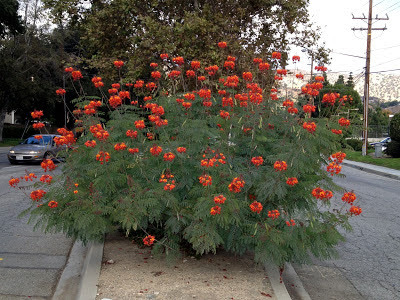 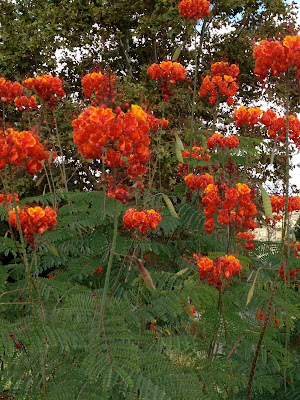 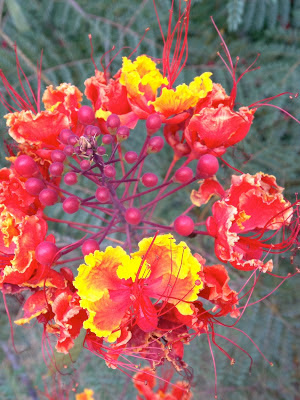 Rose Propagation or I Thought I Was Done With Potting Soil

I had been gardening in containers for over 20 years.  So, when we finally bought our house 2 yrs ago I thought I would be mostly done with potting soil as I am a GROUND gardener now!  Well, I still like pots.  They're good for moving up baby plants to a larger pot before putting them in the ground. AND they are good for rooting cuttings!  **Please be advised that it is not allowed to propagate patented roses. **    I mostly propagate hard to find roses or very old roses to give away or donate to the rose society. It IS a lot of fun.  The rooted cuttings shown here are from the rose Alba Meidiland.  I used to have it at our old house but had to leave it in a whiskey barrel that I couldn't move.  Last January I took a BUNCH of cuttings of the it that my friend and client Alice grows. I think ALL of them rooted!  There were 8(7 shown as I had already potted one up when I decided to photograph).  I think that's my record.  If you've never rooted roses from cuttings before you wouldn't know that some TAKE and some DON'T.  I was surprised to separate SO MANY with roots!  I probably should have separated them sooner.  9 months is awhile!  But I didn't until today. 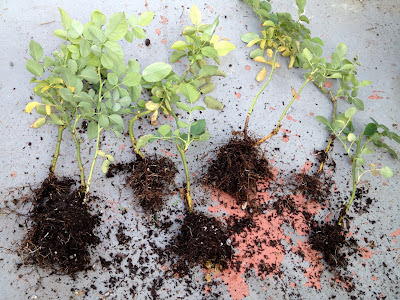 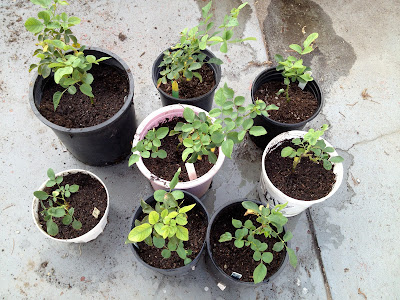 Alba Meidiland is a double flowered groundcover rose.  Maybe that's why so many rooted as you can't keep it down!  It is very beautiful and I was sad to have left it behind.   It IS available commercially. 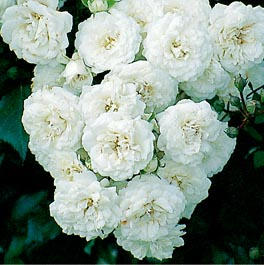 The other rose that I separated today was Guy de Maupassant which is now called Seduction.  Either name, YOU CAN'T FIND IT ANYWHERE!   I got that rose at a rose society auction about 10 years ago.  My friend Jennie Gaines(who we lost last year) and I were bidding against each other for it. She won, as she always bid on MANY auction roses.  I was so mad at her that I yelled at her in the parking lot.  And SHE GAVE ME THE ROSE!   That's how Jennie was.  I grew it for about 8 years and by then it was in a large 15 gallon can.  So I was doubly disappointed when someone stole 6 rose bushes in pots from my front yard.  I had 250 roses in pots waiting for the right time to plant(grass had to me removed, Bermuda grass had to be Round-Up'd, too hot weather).   So I was able to take cuttings from my friend and client Joanne's garden.  2 rooted! Yay! 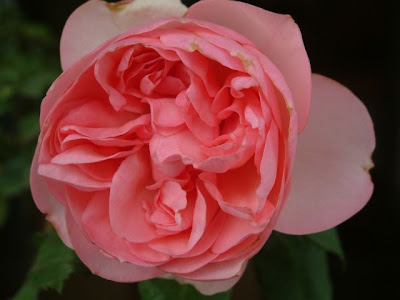 So try to root some of your favorite roses.  I do some in January when the roses are severely pruned, cuttings aplenty!  And I have done some in warmer weather as well.   I just dip the ends in a rooting hormone, place the cuttings in a pot in potting soil. And sometimes I put a cut off water bottle upside down over the pot to make a little greenhouse.   Remember, that some take and some don't.
Posted by Aprille at 5:49 PM 1 comment: