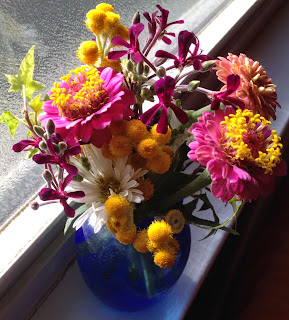 I love to make tiny bouquets, for the bathroom, kitchen windowsill or wherever. This one is under 4" tall. I included some little Zinnias, Pelargonium sidoides is the burgandy, white Asters that just started blooming and the yellow is Chrysocephalum(thank goodness I kept the tag!), a low growing gray leaved little plant I bought last year. I'd never seen it before. It has not stopped blooming. And there's 2 little sprigs of a tiny Ivy.

Do you enjoy making tiny bouquets?
Posted by Aprille at 5:29 PM No comments:

So, I bought this packet of Vanilla Marigold seeds back in March along with a whole bunch of Zinna seeds.  I potted up the seeds into 4" pots in my backyard because I was afraid they wouldn't get watered if I just set them out into my front garden.   They all sprouted and in a month or so they were big enough to plant into my front garden.  The Zinnias are doing great and are starting to bloom.  As I was watering on Sun I noticed that the Marigolds had begun to bloom too.   But instead of this(pic taken from the internet): 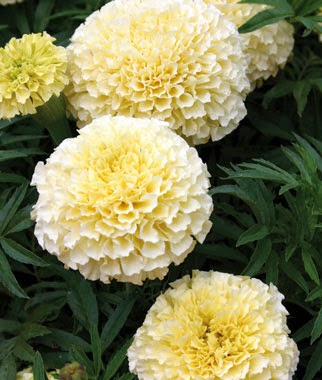 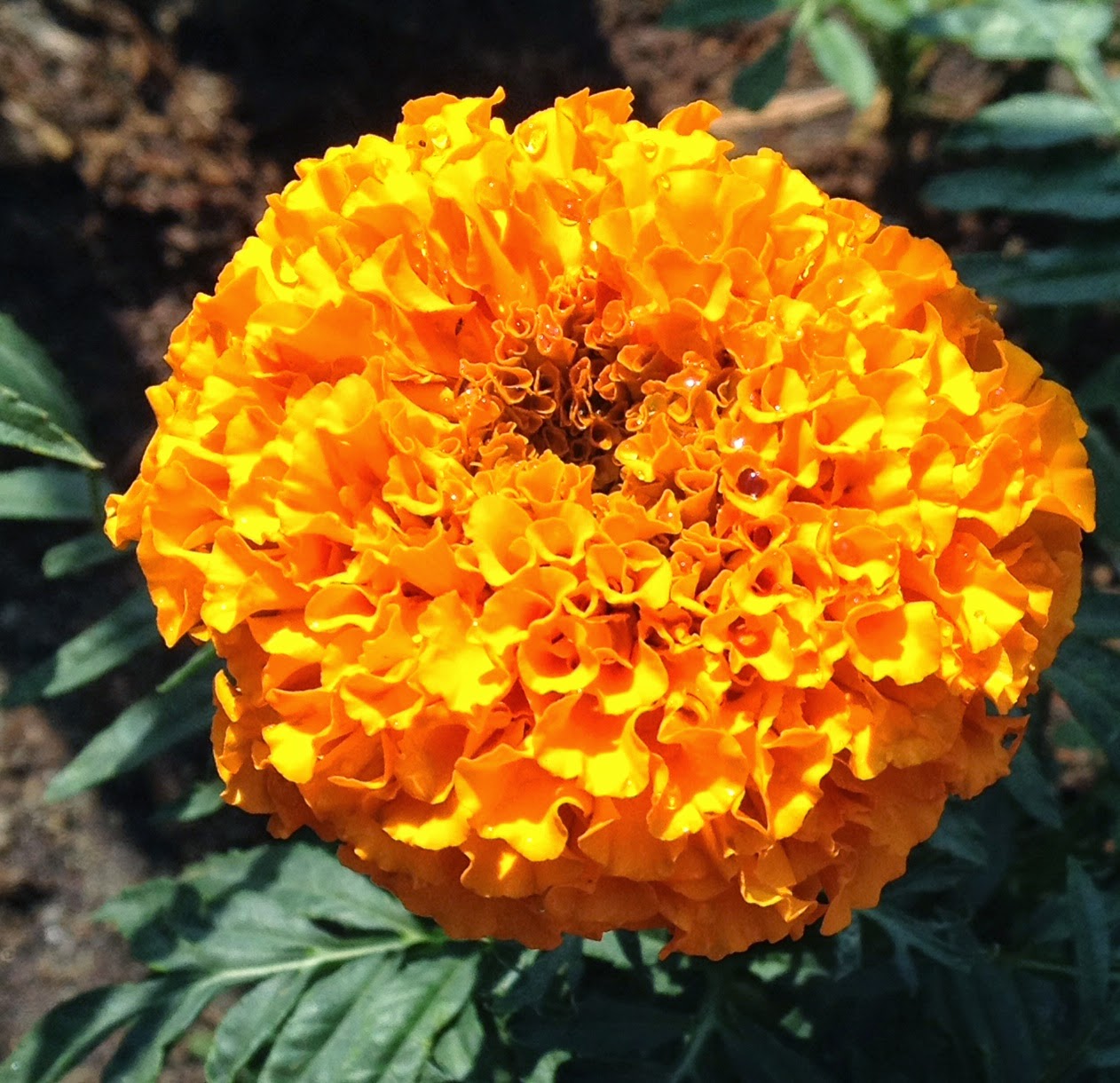 I DO Love orange.  But these were SUPPOSED to be fancy almost white Marigolds!!! Wahhh!!!  And I can't find the empty seed packet to know which seed company to no longer trust!!!!    Ugh!

Do you plant seeds and do they ever get them wrong for you too? 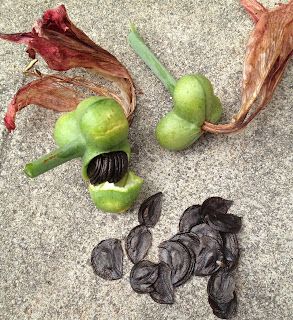 I don't really want to grow Amaryllis from seed. But I seem compelled to open them up to touch them. I love how they're stacked together inside the seed pod and how big they are. And we don't often see black in the garden. I keep thinking I could use them in something crafty but never do.

Have a good weekend in your garden.
Posted by Aprille at 11:07 AM No comments:

There seem to be a few spectacular trees that everyone knows around their town. This beautiful tree is in Arcadia on Santa Anita above the 210 freeway. It's a Cape Chestnut Tree or Calodendrum capense. It is of course from South Africa like all the cool plants are! It's a big tree as you can gauge from the car in the pic. 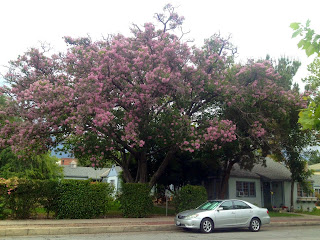 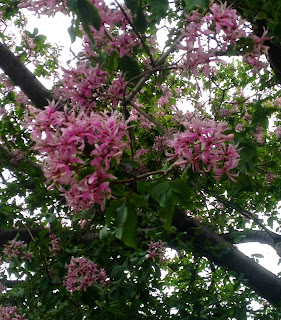 It is in our old town since we moved to Burbank. But I still look at it when I'm there and see it in bloom. What amazing trees are in your town?
Posted by Aprille at 4:32 PM No comments:

Sorry I haven't posted in a couple weeks.  We had the LA Geranium show, Mother's Day and I just came back from San Diego for the California State Button Society's show.   On my drive back to LA, I stopped at two nurseries;  Walter Andersen Nursery in SD and Weidner's Nursery in Encinitas. Walter Anderson is a very nice big nursery with a huge selection.  Weidner's is smaller than it used to be but still has some interesting things.  Of course I brought home a few plants.  At Weidner's I bought a plant I'd never seen called Alternathera Hoja del Loro or Brazillian Red Hots. 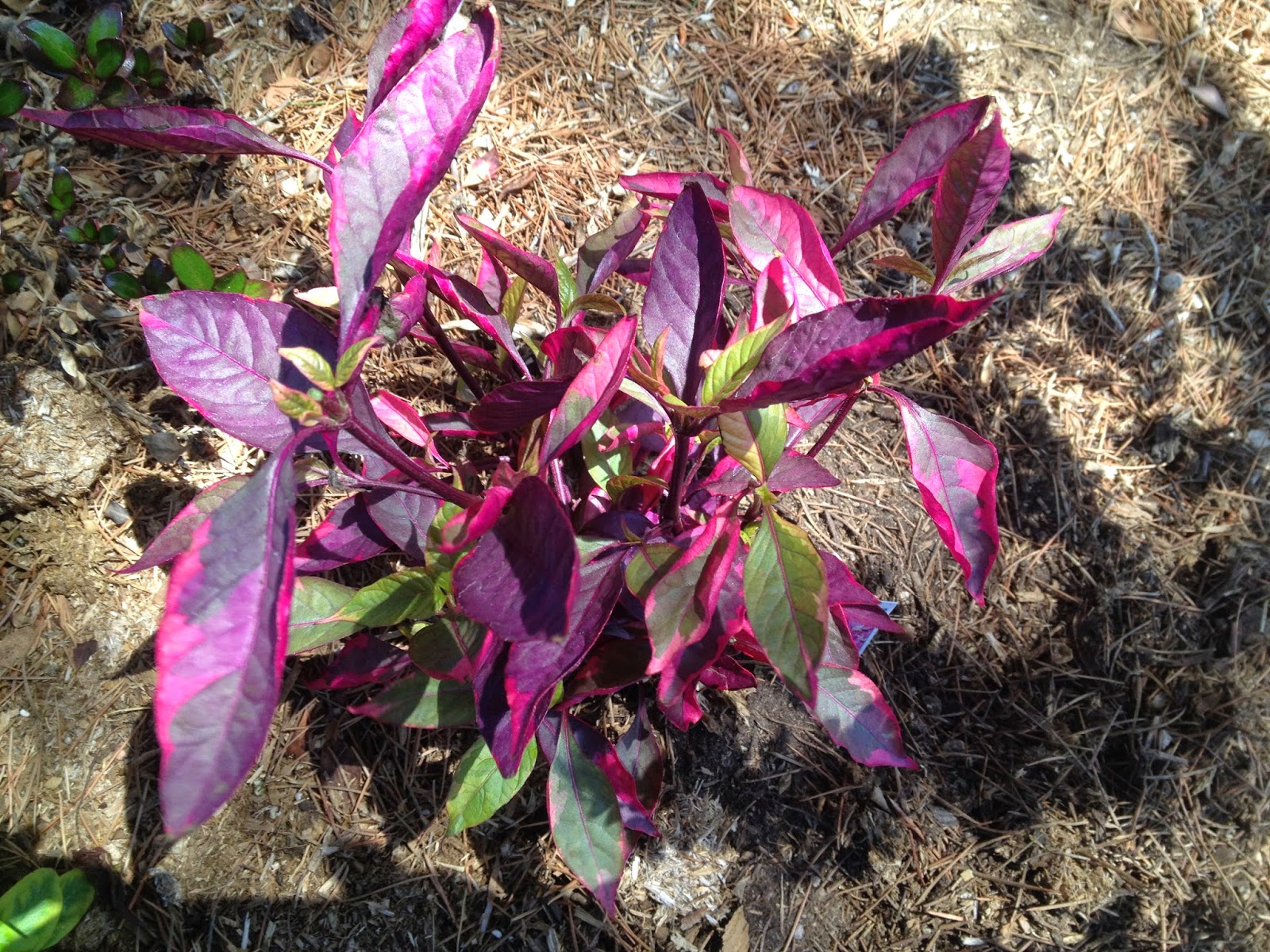 Alternathera is a mouthful, I know. Say ALL-tur-NATH-ur-uh.  Easy!  I've always loved colored foliage because they look great against all that is green.  I have two other Alternatheras; A. Purple Knight and A. Red Threads.  I'm on my 2nd Purple Knight as I lost my first in the frost two years ago.  It gets those little straw colored flowers in winter that look like Gomphrena.  I don't love those flowers but they're almost gone. This photo looks a little washed out. The foliage is really burgundy purple. 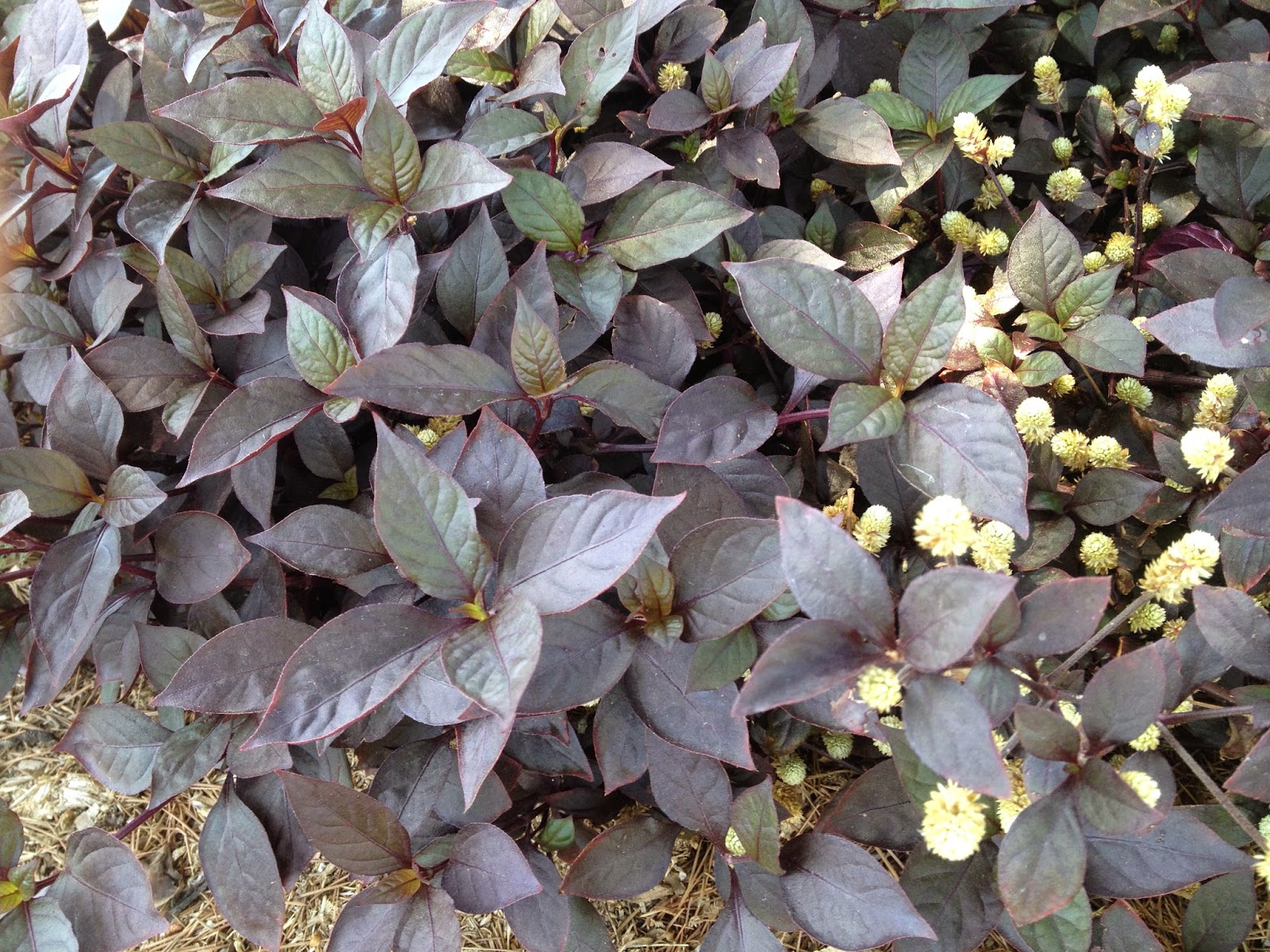 Red Threads has grown so much that I've divided it, spread it around my garden and shared some with a friend. 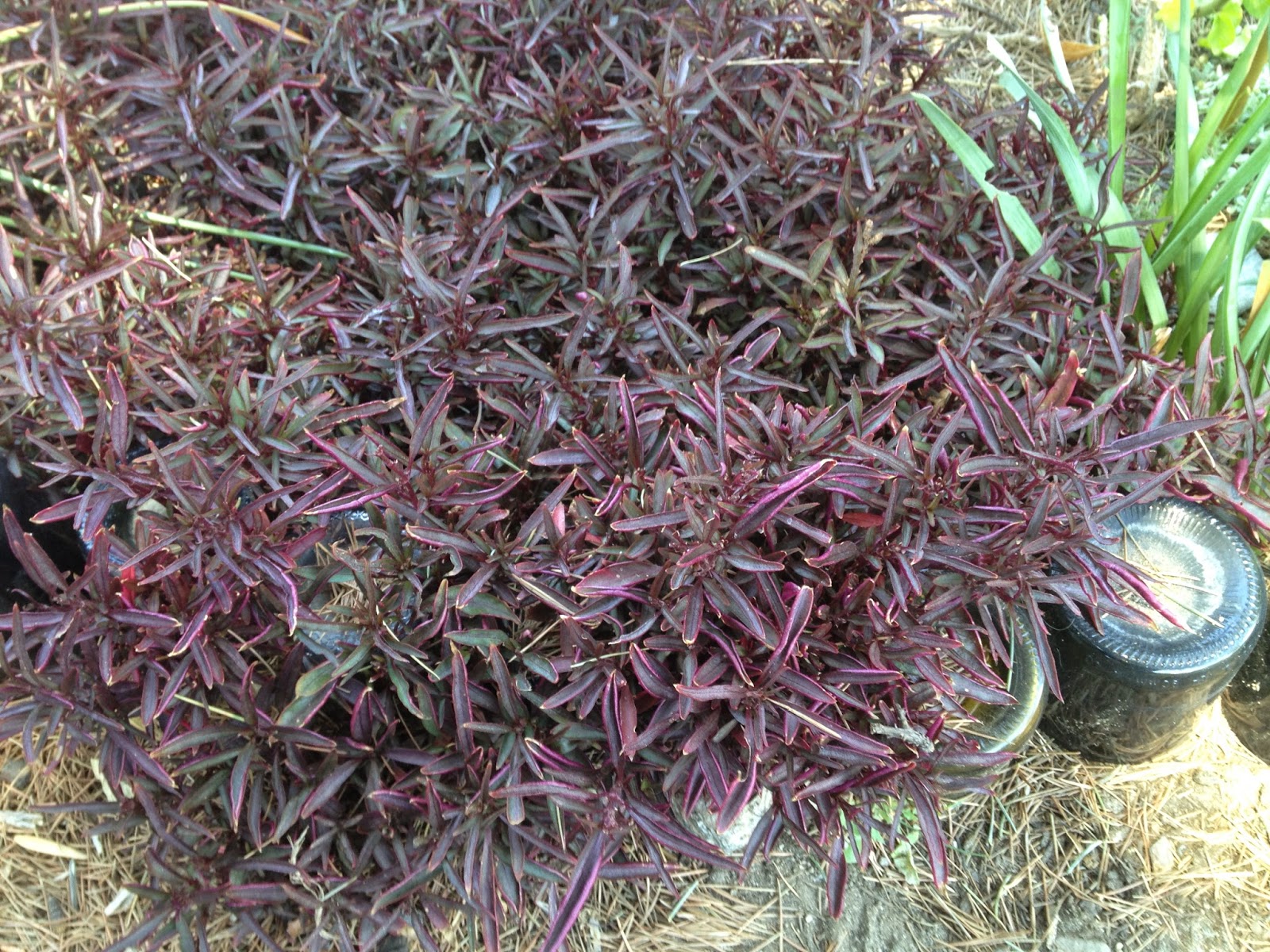 Mine do best in partial shade.  We have a big Deodar Cedar on the east side near our front door as you can see by the needle mulch that is everywhere!   These pants are super easy and grow well with a little pinching on the Purple Knight. I already pinched the new one to make it bushier.  I hope my new acquisition grows well.  I bought two just in case and planted them in the garden today.

You might try some colored foliage plants in your garden. 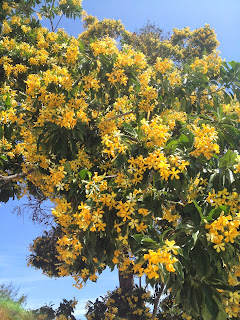 So I missed Arbor Day! It was last Friday and nobody said a thing!!!!

I went to Boston Market this week to pick up my favorite creamed spinach and saw these trees lining Riverside Dr in Toluca Lake in FULL BLOOM. They are Hymenosporum, a tree native to Australia(where all the cool plants are from). 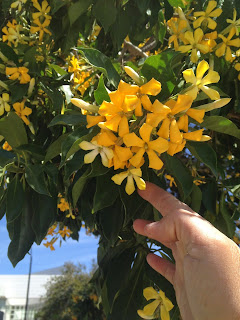 The flowers are super fragrant and start out bright yellow then fade to a creamy yellow so it almost looks multicolored. The tree grows about 30 feet tall and has a columnar habit. So it's good between buildings or where there's a small space.