I have grown this one Asparagus retrofractus for about 12 years.  It started out for me in a one gallon can as I most often try to buy smaller plants that are cheaper.  It then got potted up into a 5 gallon can, then a 15 gal. and now is in a very large 24 inch pot.  It is called an Asparagus "fern" and there are other varieties.  But Asparagus ferns are not really ferns because they do not make spores.   Some make little white flowers like the Asp. sprengeri (the cascading type that is SO obnoxious in the ground).  Some make no flowers like this one.  Asparagus ferns are propagated by division.  Most have water holding pods on their roots. That's what makes them so drought tolerant.   My big Asparagus fern sends out new shoots right from the ground that come up like bamboo maybe once a year.  They're almost as quick too!   And they do look like the edible Asparagus when the new sprouts emerge. 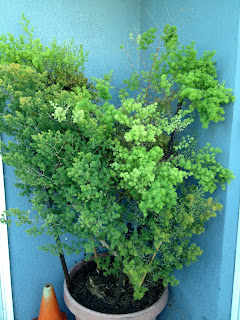 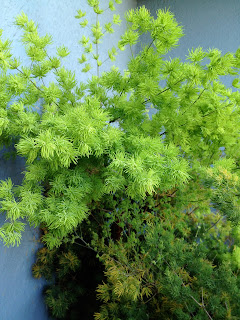 My good friend and garden guru Alice G. once told me not to cut off dead stems because they will sprout new leaves along the branches.  I thought she was CRAZY!  I had NEVER seen them do that!  A branch dies, you cut it off!!   So, last week my A. retrofractus started to drop lots of those needly leaves.  Before I knew it, new sprouts were coming along the branches!   Crazy, I know :-)  But it's just like Alice said.  It was really difficult to capture this in photos.


See the tighter needles in this photo.  That's new leaves coming along with older leaves! 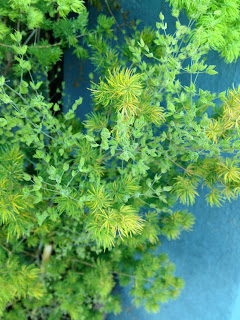 Asparagus retrofractus is a wonderful plant.  It will grow upright to about 6 feet when at it's happiest.  It likes some shade but will tolerate some sun.  It is a great filler for cut flower arrangements and can be used short or long.
Posted by Aprille at 3:52 PM