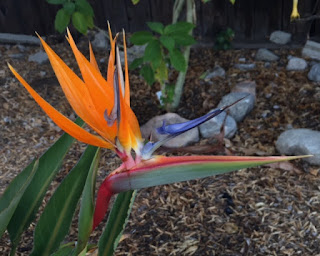 Bird Of Paradise plant or Strelitzia (say strel-IT-zee-uh) reginae is ubiquitous in SoCal. It's everywhere! Funny that it's the official flower of the city of Los Angeles but it's from South Africa. Research tells of its naming for British Queen Charlotte of Mecklenburg-Strelitz, 1744-1818 wife of King George III. It was first introduced at The Royal Botanic Gardens at Kew in 1773 by Sir Joseph Banks. It is not cold tolerant and in the US is only grown outdoors in California and Florida. But even with the few frosts we get here in some winters I have never seen damage. 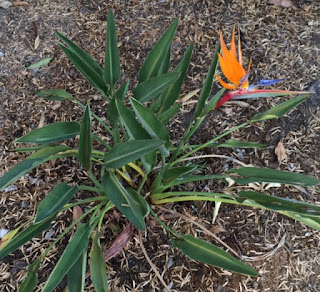 It is so common in SoCal that I used to not like it. But I do love orange flowers and finally decided that I needed one in my garden. Bird Of Paradise is super drought tolerant and is slow growing. It took two years for it to bloom in my garden. Peak flowering is said to be winter through spring. But I see them blooming many times throughout the year.

Happy Gardening!
Posted by Aprille at 7:54 AM